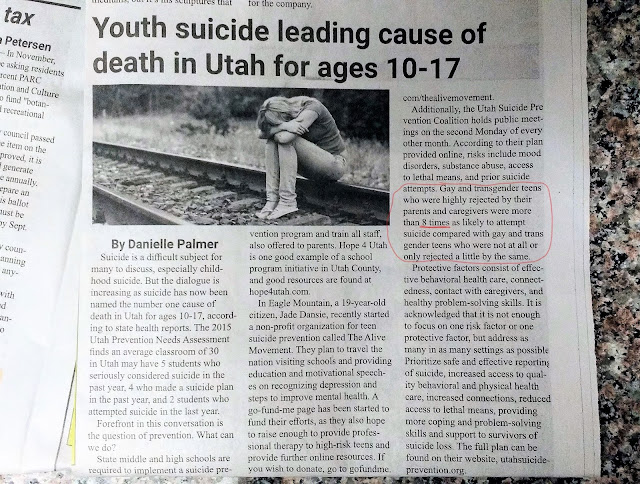 Gay teens are being rejected in Utah and the results are deadly.

I just got this newspaper out of the mailbox. It's The Crossroads Journal, a newspaper with information about Lehi, Utah and the surrounding cities. As the article title says, suicide is the leading cause of death for teens in Utah.

Suicide is definitely a big deal. I've never heard anybody make light of the topic or not take it seriously. This newspaper article mentions a go-fund-me page for a non-profit organization called The Alive Movement, a monthly public meeting held by the Utah Suicide Prevention Coalition, and a website, utahsuicideprevention.org, that has resources and phone numbers for anyone who needs help. It's good to see that people are aware of this issue and that they are trying to make changes.

The reason I'm writing this is that I think there are still parts of this message that are not getting fully transmitted. Take this paragraph from the article, for example:

Most people will probably miss this paragraph because it's at the end of an article that's on the very last page of a local newspaper.

The part about rejected gay and trans teens being 8 times more likely to commit suicide is the part that I think needs to be brought into the spotlight. I think there are some major cultural changes in Utah that need to happen, and to get to the bottom of why gay teens are being rejected in Utah we need to look at the major driver of culture in Utah: Mormonism.

The Mormon church needs to stop creating policies that are hateful towards gay people. And it's not just their policies. Even their careful PR interviews can be cruel:

"I can also imagine some circumstances in which it might be possible to say, ‘Yes, come, but don’t expect to stay overnight. Don’t expect to be a lengthy house guest. Don’t expect us to take you out and introduce you to our friends, or to deal with you in a public situation that would imply our approval of your “partnership.” - Dallin Oaks, 2006 http://www.mormonnewsroom.org/article/interview-oaks-wickman-same-gender-attraction

That kind of rejection needs to stop.

The November 2015 policy that equates the punishments for being gay with the same punishments that murderers receive needs to be removed.

I think if the Mormon church wanted to even more specifically address the problem of teen suicide through policy change, they could make it so that Mormons be required to NOT reject their gay children before being allowed into temples. There is an explicit temple recommend question about tithing. There is an explicit question asking about financial obligations to former spouse or children. I think there should be something explicit in the temple recommend interview about whether or not parents are showing love and acceptance to their gay children.

But there's still so far to go. This needs to be a cultural change, and the Mormon church has a HUGE influence on the culture in Utah.

This topic needs to get out of the back pages of a little newspaper and into the thousands of chapels and bishop's offices where gay Mormon teens are struggling to fit into a culture that is so openly hostile towards them and causes their families to reject them. This topic needs to make its way into church policies so that loving connections can replace deadly rejections.
No comments:
Email ThisBlogThis!Share to TwitterShare to FacebookShare to Pinterest

Mormonism is Bad for Women

I got my hair cut this morning by a woman who was raped while growing up in Utah and never reported it because of the shamefulness of it all. Can you imagine if something like that happened to you and it was harder for you to report it than to not report it?


I think there are huge problems with the way women are treated in Mormon doctrine and culture that lead to horrible outcomes like that. That lead to women feeling voiceless. Powerless. Abused.

What do Mormon women get? They get to disappear. Yeah, they might nurture children here on Earth, but then what? If we have a Heavenly Mother, she disappeared. Men become the nurturers. God, Jesus, all the highest callings in the church and even in the theology, all men.

Women are given nothing godly to aspire to except to be a background fixture (one of many wives possibly given that plural marriage is still allowed in temples) to their husband's glory.

In the temple, women have to bow their heads and say yes in agreement with the covenant to hearken to their husbands (this is a link to a video of the section of the endowment ceremony where women make this promise: https://www.youtube.com/watch?v=5VrsFEiTpsQ&feature=youtu.be&t=1749). They promise to become priestesses to their husbands while the husband is a priest to God.

This is not a church that helps women grow. It does not value women outside of their reproductive abilities and tells them that if they lose "purity" in that area that they would be better off dead (see Moroni 9:9, which teaches that chastity and virtue are more important than life itself). It does not give them a voice of their own.

It does not treat them with the dignity that human beings deserve and then covers up this horrible lack of respect by putting the voiceless, powerless women on a pedestal of flowery, empty, rhetoric.

I love how the person in this video puts it: