Mission Stories I Left Out of My Homecoming Talk: Ceviche 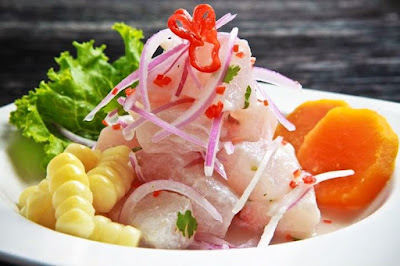 My husband served a mission in Peru from 2010 to 2012. He wrote this series of posts to share what his mission was really like.

Ceviche is the culinary pride of Peru. Peruvians talk about ceviche the same way that Texans talk about barbecue ribs. Similar to sushi, the meal consists of raw fish "cooked" in lemon juice, and served with sweet potato, choclo corn, and cancha nuts. The cities that I served in were dotted with cevicherías, serving up the meal to hungry locals and tourists.

In my mission, we were forbidden from eating ceviche. Because the meal involved raw fish, and some restaurants did not have sanitary food preparation practices, there was a chance of food-borne illness, especially for gringos with sensitive stomachs. It was better not to risk it, so our mission president made it a strict rule that no missionary was to eat ceviche.

Well, kind of. See, sometimes ceviche was allowed. One month, my zone had the most baptisms in the whole mission. The mission president came by, congratulated us, and then with a smile invited us all to go out eat ceviche with him at a nice restaurant. I remember the thrill I felt inside as he ordered for us. I had heard about this meal for months, but, as an obedient missionary, I hadn't tried it until that moment. The meal did not disappoint.

It did bother me a little bit, though. Why was ceviche forbidden most of the time, but allowed at other times? Later in my mission, my mission president explained the inconsistency. He said that if he was around, he could ensure that we were going to a reputable place, where he knew the meal would be prepared safely.

My missionary brain was fine with this. After all, the mission president was the one who received revelation for the mission, and it was our job to be obedient. There didn't need to be a consistent rule for ceviche. That's why we have continuing revelation, so that we're not condemned to using consistent principles to decide what is right and wrong. After all, the Book of Mormon teaches this clearly. Polygamy is usually an abomination, except when God commands it to raise up seed. Murder is usually wrong, but sometimes God can command you to behead someone if you really need one of their books. Ceviche is usually a dangerous food, but if the mission president is around and your numbers are good, then it's safe. Obedience to God's will is the only consistent principle we need, and whether by God's own voice or the voice of His servants, it is the same.

Now, five years removed from my mission, I see things in a different light. Ceviche was a tool of control wielded by my mission president. It was how he rewarded the missionaries who had earned his favor, and punished those who had not. The food safety explanation was a front, a lie.

I know this isn't a story of some terrible abuse by an ecclesiastical leader. It's about a meal and an arbitrarily enforced rule. I know people are imperfect, and I didn't leave the church because I was offended by my mission president. But missions are a big deal. It was two years of my life--two years under a system of total control and perfect obedience to authority. And, as this story shows, that authority was not always used fairly or honestly. Still, I never criticized my mission president for his faults. There was a missionary who did, and experienced the consequences. But I'll save that story for another post.
3 comments:
Email ThisBlogThis!Share to TwitterShare to FacebookShare to Pinterest

Going through the temple is like entering a contract (or covenant to use the religious term). An important part of being Mormon is making and keeping sacred contracts (covenants) in the temple.

Having accurate information about what's in the contract is essential before signing any kind of contract. In the case of this temple contract (or temple covenant), the church itself provides very little information about what is in the contract. Temple prep classes give vague lectures on the importance of making and keeping contracts (covenants), temple open houses let people walk through the temple, and members talk about their feelings about the temple, but all this is done without actually explaining anything about the ceremonies themselves or the details of the temple contract.

Having accurate information is key to making good choices. Having access to accurate information is especially important when entering into contracts as life-encompassing as the temple contact. For example, as part of the endowment ceremony, members covenant to give themselves, their time, their talents, and everything that they have been blessed with or will be blessed with to The Church of Jesus Christ of Latter-day Saints. That's a pretty big commitment.

The temple recording I've linked to below offers accurate information about that contact, specifically the endowment ceremony. You can skip 58 minutes to hear about the law of consecration, which is the part where the members promise to give everything they have to the church. It is a recording from an actual temple session at a temple in Arizona. Endowment ceremonies are nearly identical across temples (sometimes the version of the movie is different, and some temples will have live actors instead of a movie).

From the temple script:

"We are instructed to give unto you the law of consecration as contained in the book of Doctrine and Covenants, in connection with the law of the gospel and the law of sacrifice, which you have already received. It is that you do consecrate yourselves, your time, talents, and everything with which the Lord has blessed you, or with which he may bless you, to the Church of Jesus Christ of Latter-day Saints, for the building up of the kingdom of God on the earth and for the establishment of Zion."

I know some people won't want to watch it, and that's fine. There are other people who will want to watch it, and they have the right to do so. In fact, I think they should do so. Especially Mormons who are thinking of entering into the contract. They deserve all the accurate information they can get before jumping into something so big.

This is the bottom line: if the Mormon church won't provide accurate information about the temple ceremonies, then people on the internet will. And that's a good thing.

This link starts in the middle of a Mormon temple endowment session, at the part of the session that talks about the law of consecration: https://youtu.be/5VrsFEiTpsQ?t=3518

2 comments:
Email ThisBlogThis!Share to TwitterShare to FacebookShare to Pinterest

In general, I don't have a problem with churches hiring lawyers. It would be naive to expect a large organization not to employ some lawyers or even a team of lawyers. The judicial system is complicated and I see nothing wrong with an organization hiring specialists to help that organization navigate through the system.

I do, however, think it's wrong for the Mormon church to use its resources to keep information from the general public and from the members who give so much time and money to the organization.

Here's an example of why I think the Mormon church is using its resources to hide information:

In early March 2017, someone from intellectual property office of the church sent a take down notice to MormonLeaks, a website that has been leaking internal videos and documents since October 2016. The documents hosted on the MormonLeaks website so far have included pay stubs to church general authorities (with social security numbers removed), information about the cost of furniture inside of temples, agendas and presentations from meetings of the church's apostles, and a number of other items.

What damage has MormonLeaks done to the church that the church needs to send a notice to them?

There is no question that the church would be justified in taking action in some cases.

Are the documents slanderous?
Are there forged or false documents included on the MormonLeaks website?
Were these documents made-up just to make the church look bad, so the church needs to defend its public image?

In the case of MormonLeaks, the answer to these questions is no.

The notice sent in March shows that the church is going after MormonLeaks with the claim that they are breaking copyright laws.

The take down notice can be seen here: 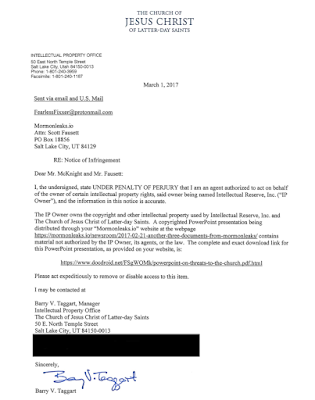 The fact that they are claiming copyright infringement legitimizes these documents. It establishes that these documents are, in fact, used internally by the church and contain accurate information.

Given that these are legitimate documents actually used internally by the church, why do I think they shouldn't be able to claim copyright infringement?

What does it matter if their meeting agendas and pay stubs get leaked? These items aren't some sort of creative content. They are business documents showing the internal workings of the organization that one would expect an open and honest organization to give out freely. Does making that information available to the public damage the Mormon church somehow?

By issuing this copyright notice, the Mormon church is admitting that this information IS damaging.

The Mormon church is either the one true church, as they claim to be to the members who they require 10% tithing from, or it is a corporation trying to make sure that the wizard stays behind the curtain.

I don't think that it's the one true church, and I think it's despicable that they try so hard to keep their members in the dark. The "prophets" of the Mormon church seem more interested in profits than in being open and honest. Why else would they care if this information became available to their tithe-paying members?
No comments:
Email ThisBlogThis!Share to TwitterShare to FacebookShare to Pinterest
Newer Posts Older Posts Home
Subscribe to: Posts (Atom)